Despite a disastrous fire, SV Fortuna Ingersleben is keeping the ball rolling

SV Fortuna Ingersleben e.V. has every reason to celebrate: Tim Kliche has won EUR 1,000 for his sports club from the OeTTINGER Brewery Gotha personnel development program. The 28-year-old, who works in maintenance at the brewery, will use the money to help give a new lease of life to the club, which was completely destroyed by a fire caused by a technical fault in June 2018.  Fortunately, nobody was hurt. Nevertheless, the distress caused by the fire was of course huge. A delighted Tim says: “The clubhouse was always at the center of all that was going on.The money donated by OeTTINGER Brewery will now help us to refurbish a part of our old home and get back to normal club life.”

Tim is a football hooligan – in the positive sense! He made his debut on the pitch when he was twelve years old before coming to SV Fortuna Ingersleben in 2007. With his folding bike and sports bag on his back, he went to the training sessions on the sports field twice a week. Tim remembers these sessions with fondness: “It was great fun to be included in the club by my classmates and those who had been born-and-bred in Ingersleben. Since then, I have made many new friends with people of all ages.” And the club is no stranger to success either. Time brought the necessary experience and the eleven players became a functioning team. “Due to injury, I had to give up my footballing career early”, says Tim sadly. However, he continues to fervently support the club as a non-playing member and fan. Then, in 2016, Ingersleben was promoted to the top league in the region, making it the first time in 15 years that it featured in a higher division. The first team is currently playing in the Staffel 1 Erfurt/Sömmerda regional league and is halfway up the league table. Meanwhile, the second team in the regional league is battling in the bottom third of the table to avoid relegation. Sports-fanatic Tim says: “Making sure that two teams are fit to play is a huge challenge.”

Of course, the serious fire was a huge blow for SV Fortuna Ingersleben. Speaking on behalf of all 141 members, Tim says: “We were shocked when we heard the news of the disaster.” The fire had a profound effect, not only on members of the club, but also on the local population and other clubs, who shared the sense of shock. Tim adds: “To date, the club has received around 100 donations of various types and from a number of sources, including private donations from the population as well as from other sympathetic football clubs and regional companies.” Even the club’s “big neighbor” – FC Rot-Weiss Erfurt – lent its support to the Ingersleben club by staging a benefit match in the Steigerwald stadium. Tim Kliche is confident: “All the signs for an early start to rebuilding work and fast completion of the new club home are positive. Thank you, OeTTINGER!“

A further EUR 500 out of the current Gotha personnel development program went to maintenance member of staff, Patrick Sieber, who is donating the money to the development club of the Friemar elementary school. Lab technician Gregor Herrwerth is giving his EUR 1,000 award to the “Du musst kämpfen” (You Have to Fight) charitable initiative, which supports people gravely ill with cancer. 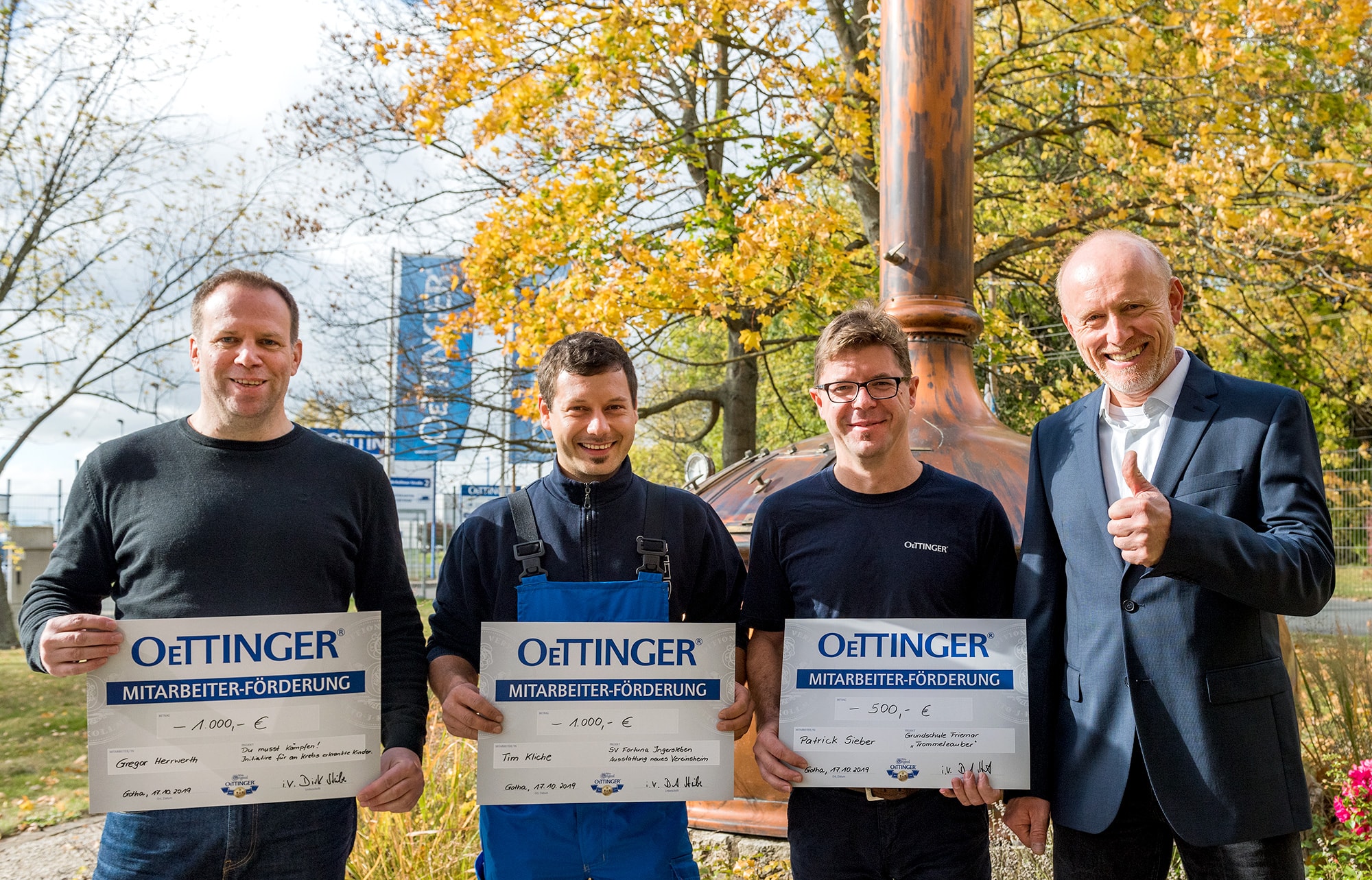 Thanks to the OeTTINGER personnel development program they can give their welfare projects financial support (left to right): Gregor Herrweith, Tim Kliche and Patrick Sieber, seen here with Technical Operations Manager of the Gotha brewery, Dirk Stüber.