A donation of EUR 1,250 from the OeTTINGER personnel development program in Gotha was a very welcome support for the birthday celebrations of the Gothaer Bierfassheber, the city’s beer barrel lifting squad, which celebrated its 25th birthday at the beginning of July. In contrast to football, track and field, and tennis, which are without doubt among the most popular sports in Germany, the team was formed to pay homage to a rather more unusual discipline: lifting kegs of beer. But what precisely does this involve?

OeTTINGER employee Steffen Bluhm clarifies: “Lifting beer barrels is just one part of our sports offering. In general, we focus on strength training of all kinds. This includes, for example, bench presses and powerlifting too. Moreover, we have a running club and an aerobics group, while we also offer disability sports as well.” Bluhm, 60, works full time in OeTTINGER Brewery’s bottling department in Gotha and has been a member of the Gothaer Bierfasshebersince 2005. In his main discipline of lifting beer barrels, Bluhm took part in numerous competitions as an athlete up to 2008. He has been heavily involved in the Gothaer Bierfassheber’s activities for more than a decade now. The team has also received recognition outside Germany, with the athletes having already participated in international championships and tournaments with great success around the world. One of the squad’s disabled powerlifters even took part in the Paralympics in Sydney, Athens, Beijing and London.

The team’s very own gym holds training sessions two to three evenings a week. The key to the sporting discipline of lifting beer barrels is a combination of technique, power and endurance. The aim is quite simple: Standing on a podium, athletes attempt to lift off the ground a keg of beer filled with concrete and attached to a barbell. The lightest keg weighs around 80 kg, with heavier barrels weighing in at up to 200 kg. If this is still too light, additional weights can be added. Tobias Zinserling, the team’s record holder and one of the most successful athletes at competitions, can even lift a barely believable 450 kg. Lifting beer barrels is by no means purely a man’s game, as the Gothaer Bierfassheber also have numerous female members. “You can truly say that our team and our sport are very special. We are a diverse bunch of younger and older athletes, men and women alike. Lifting beer barrels is a discipline that anyone can try out. With the right technique and proper training, you can start to lift remarkably heavy weights within a short period of time”, Steffen Bluhm explains.

The team now boasts more than 170 active members and has developed into a true institution within the city of Gotha. In July 2019, the strongmen (and women!) came together to celebrate the team’s 25th birthday – and OeTTINGER Brewery in Gotha played its part in the celebrations as well.“With the donation from the OeTTINGER personnel development program, we were able to purchase new sporting equipment, additionally there were gleaming trophies, certificates and other prizes to be won for everyone who took part in the competition held to mark our birthday celebrations. And, of course, the drinks provided by OeTTINGER Brewery were lovely and refreshing too”, commented Steffen Bluhm on securing the donation for the Gothaer Bierfassheber. “It so great that I was able to support the team with this donation. I hope that we will all remain fit and healthy so that we can celebrate amazing experiences and successes together in future. Here’s to the next 25 years!”

The donations from the OeTTINGER personnel development program this July in Gotha also included an additional EUR 750 each for Michael Rothlauf and Oliver Rottstedt. Michael used the money to fund a trip to Hungary for the Ebenheim cultural partnership association, while Oliver put his donation towards expanding the sport center used by the Pferdingsleben fire brigade. 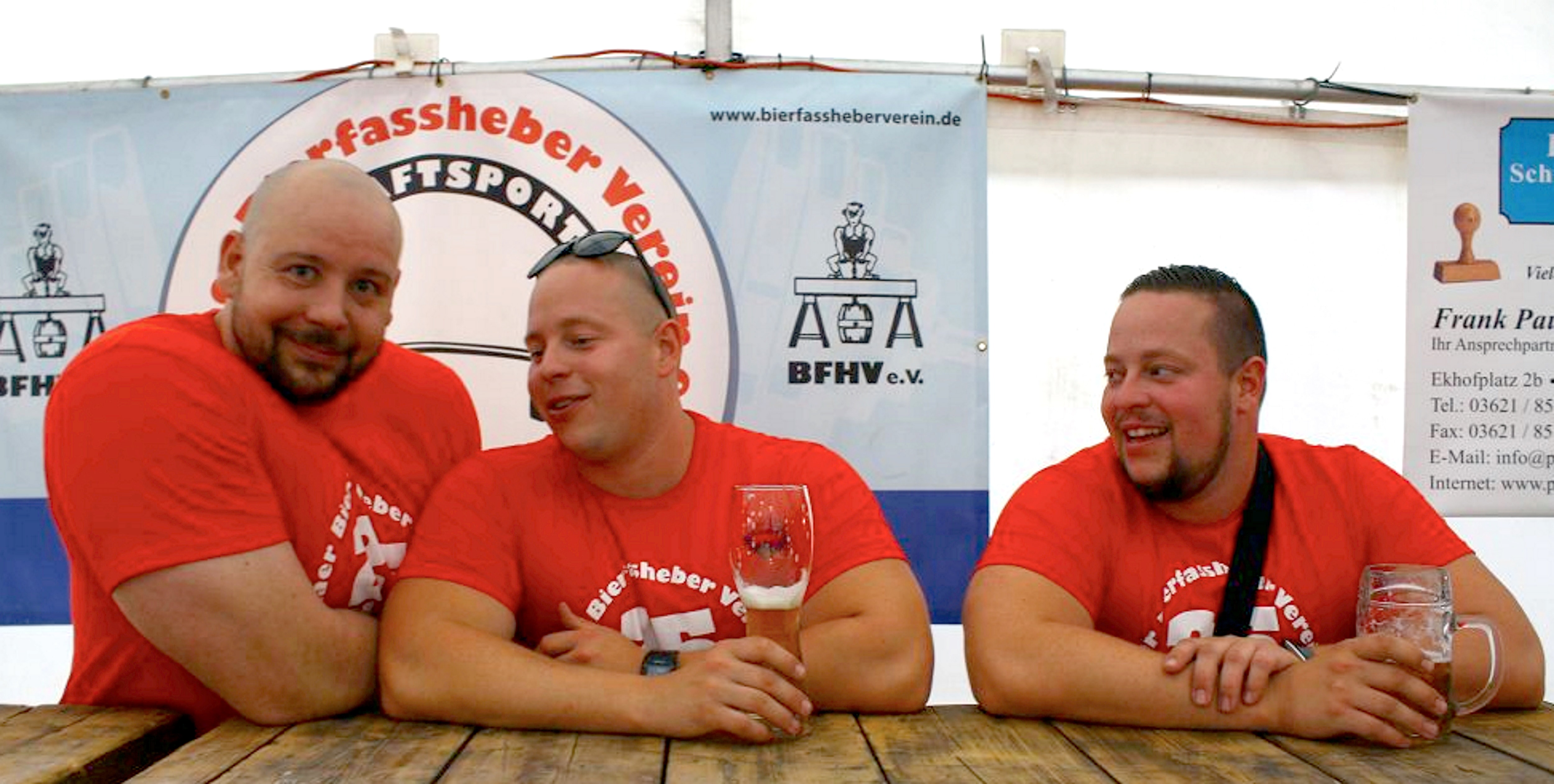 Thanks to the OeTTINGER personnel development program, they were able to financially support their chosen social projects: Steffen Bluhm, Michael Rothlauf and Oliver Rottstedt (f.l.t.r.), together with Florian Fahr (second from the left), Site Manager at the Gotha brewery (© OeTTINGER Brewery).

The Oettinger personnel development program – about this concept