The percentage of beer drinkers preferring to go alcohol-free is massively growing. Sportsmen and women in particular appreciate alcohol-free wheat beer, which has fewer calories and is also isotonic, which lets them make up for any loss of water and minerals more quickly after sport.

All the more pleasing, therefore, that Oettinger alcohol-free wheat beer itself has again proved itself to be a veritable sporting ace. Once more at this year’s DLG award ceremony, it made it onto the winners’ podium, this time winning a gold medal.

The Oettinger Brauerei GmbH is very proud of the final decision arrived at by the DLG Test Centre for Food in Frankfurt am Main: “This award is testament to the company being considered one of the leading purveyors of quality among brewers.” 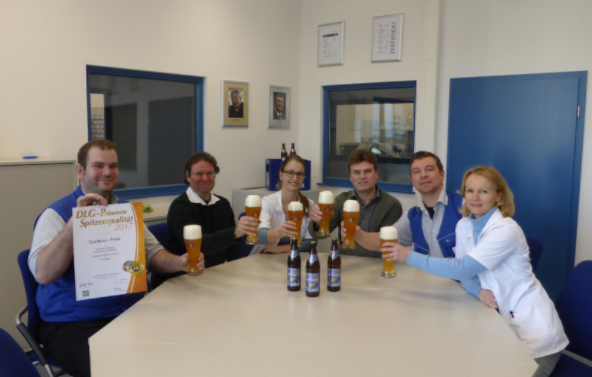 Beaming faces about the quality assurance of Oettinger Brauerei GmbH and the DLG’s gold medal.

About OETTINGER
Producing around 930 million litres, the Oettinger Group is one of Germany’s largest brewing companies. Every year it bottles around 2 billion bottles and cans with beer, beer-mix drinks and soft drinks. The family-owned company, which has been based in the Bavarian town of Oettingen since 1731, now has a workforce of 1,050. Apart from end-to-end quality control, state-of-the-art production facilities at four different sites, two logistics centres and company-wide environmental awareness, the company also endeavours to provide attractive pricing – made possible by efficient direct sales. Oettinger products are sold across the globe. The entire range of beer has also carried the official “GMO-FREE” seal since March 2013 – in the spring of 2015, the “GMO-FREE” and “Non-GMO” seal was also extended to export beers.

It doesn’t get much better than this: The F.A.Z Institute, an organization which belongs to the Frankfurter Allgemeine Zeitung publishing group, has awarded...

Top quality is a tried and tested recipe for success: For what is now the tenth time, our OeTTINGER Brewery Mönchengladbach...

OeTTINGER brewing culture: Film about beer in and from Bavaria

Beer has always been part of Bavarian culture in some form or another. Now, as part of the TV series...